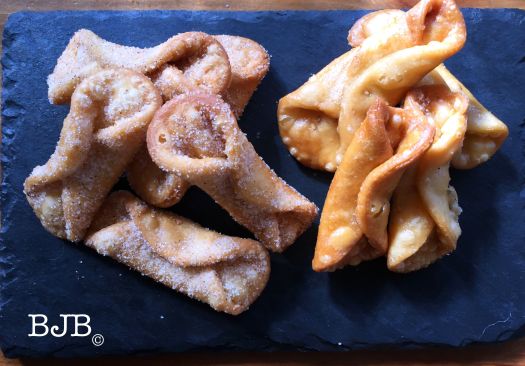 I love to make these type of recipes of which I know nothing other than they are for delicious dishes. And discover (along with you) its origins and the traditions that are linked to them.

Pestiño history can be traced back at least to the sixteenth century and is probably much older, since fried mass technique dates back to the Spanish cuisine to medieval times, a practice known by Sephardic cuisine.

The pestiño is a type of “fruta de sartén” (pan fruit) and is related to the Moroccan Shebbakiyya, suggesting a possible common origin, perhaps Andalus. While pestiño usually is make at Christmas and during Holy Week (mainly in Andalusia and Extremadura), the Shebbakiyya is commonly eaten during Ramadan for its energy value, ideal for breaking the fast.

I recommend you to try at home these traditional sweets in Spanish cuisine, which already captivated Sancho Panza, at the marriage of Camacho the rich (Don Quixote, Part II, Chapter XX Wherein an account is given of the wedding of Camacho the rich, together with the incident of Basilio the poor).

Infuse olive oil with the lemon peel and aniseed, heating at low temperature until it begins to fry.

Mix flour, wine, sesame oil, salt and flavored oil. Work the mixture with your hands until smooth (about 15 minutes). Form a ball, cover with a kitchen towel and let stand for one hour.

Sprinkle your work surface with flour and stretch the dough, until very thin. Cut ovals or circles and press the ends together, using a little water to make them stick if necessary.

Fry in hot oil until golden brown and let them drain on a plate with paper towels.

To decorate, coat them with a mixture of sugar and cinnamon or a honey syrup.

To make the syrup, put the honey and water in a saucepan, bring to boil and immediately lower the heat. Cook for 10 minutes, wait for it to be at room temperature before using.